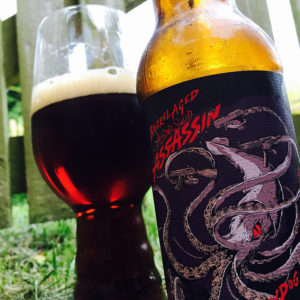 BrewDog seem to make rather a lot of beer to an ABV of 9.2%.
Just saying.
This is a ramped up version of Albino Squid, with more booze and some woody whisky warmth from the barrel ageing.
I first tried this a week or so ago and found the bottle I opened thin and slightly flat and watery.
This bottle is much better, pouring with a nice frothy head and smelling of boozy Dandelion & Burdock.
Thanks to the rye there’s a good earthiness to the body of the beer, and the hops are a twangy, grassy, sherbet lemon fist of fun, and then there’s a moist mushroom and brandy fug and lots of woodiness from the barrels.
All in all, pretty good.