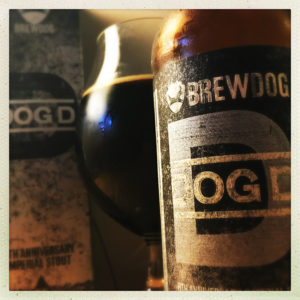 Brewed to celebrate BrewDog’s 8th Anniversary, this isn’t half bad.
It reminds me a lot of the original Paradox Stouts that BrewDog were making when I was first becoming a beer geek over half a decade ago.
I used to get them from Duncan Murray Wines and I adored them.
Since then I’ve dived down deep into the world of beer geekery and the result is that I’m not shocked or awed by Dog D anymore.
Don’t get me wrong, it’s a good beer, it’s just that I’m no longer blown away by earth shakingly big beers packed with flavour.
That sounds a bit like I’m showing off, but I’m really not.
If Dog D was to be the first massive Stout you’d ever opened you’d remember it for the rest of your days.
Paradox was that beer for me.
And so Dog D is another beer in a long line of very good super high ABV Stouts from BrewDog.
It does all the things you’d want, pouring a fathomless black with just the hint of a head and smells of rum and window putty.
The malting is enormous, all thick chewy treacle tart and burned toast, charcoal, honey, prunes and Blu Tac.
Honestly.
There are hops too, though they’re a slight aside, some crunchy red autumnal leaves, pine resin and an orange marmalade that lends a much needed bitterness to the edges of this round chewy beer.
And then there’s the massive hit of rum and raisin brandy booze that manages never to burn, but warms your belly, makes you drunk, it’s sexy and seductive and it leads you towards the long and rich espresso and whisky finish.
Yup, if I’d not had the pleasure of Paradox, this could be life changing.