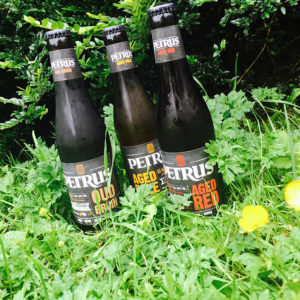 Brouwerij De Brabandere have released a set of three beers that can be mixed together to create your own flavour profiles.
It’s a nice idea and one that I was intrigued to try.
All of the range of Petrus beer have their Aged Pale Ale (7.3%) as the backbone and so I decided that I should try that first, before opening and adding the other two in different quantities.
I had no intention of this being in any way scientific and so I’m not mixing by set amounts or anything, I just want a general idea of how the three beers work together. 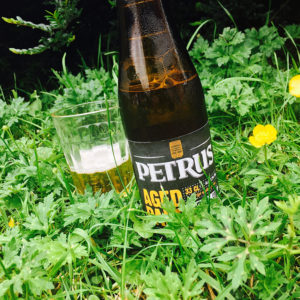 By itself, the Petrus Aged Pale, a 100% Foeder beer that has been aged for over twenty four months in Oak barrels, has a cider Apple aroma and a super sharp dryness.
It’s bitter to the point of bordering on sour, with lots of bruised apples and honey in the background, some steely herbal greenery from the hops and a tongue curling finish.
The Aged Red (8.5%) mixes a background of the Pale with Brun beer and cherries, creating a soft velvety Kriek that smells of Black Forest gateaux and has a lovely smooth black cherry, brandy and treacle body, the sourness of the Pale just peeping through now and again. 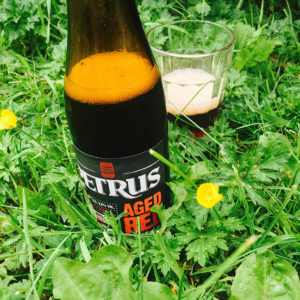 Finally the Oud Brun (5.5%) mixes the Pale with a Jong Brun and smells warm and malty, leading you into a beer with a round digestive biscuit and toffee malt, a nice nutmeg earthiness and some hazelnuts coming through along with the subtle prickle of the underlying sour beer freshening you up for your next sip.
And so, with each of the beers tasted individually I decided to start mixing.
First I went for the Pale and the Red and this immediately took the roundness out of the cherries, making them feel fresh and zingy with bitter lemon and pithy mown lawns.
Next up as a fifty fifty mix of Oud Brun and Aged Red which created a real pudding of a beer. 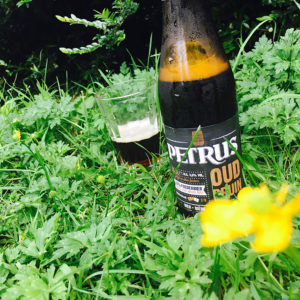 It was almost too sweet for me, the maltiness of the digestive biscuits from the Brun and the sweet cherry cake of the Red making everything sweet and sticky and almost removing any trace of the crisp sourness from the underlying Pale.
The third mix was the Pale and Brun and it was my least favourite, not creating anything much different from the original Oud Brun save for a bigger hit of tartness in the finish.
Finally I stuck equal measures of all three into my glass and took in the heady aroma of damp wood, sweet fruit and soft caramel that wafted up at me.
This triple blend works pretty well with that sweet sticky pudding that I mentioned being properly tempered by the hard pithy sourness of the Pale.
All in all my favourite blend is the equal measures of Pale and Red, that tart cherry sexiness is very good indeed.
You could go on into endless different combinations given the time and inclination, but nonetheless my short and to the point experiment was a lot of fun.
Right, if you’ll excuse me, I have three open bottles of Belgian beer to finish.

If you’d like to try these mixers for yourself you can get hold of the range through several of the online stores, I was kindly sent mine by Boutique Bar Brands in association with James Clay