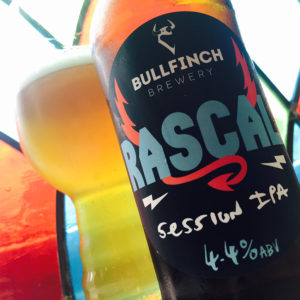 I’m starting to think that lots of breweries are just rebadging some of their Pale Ales as Session IPAs to fit in with the current trend for SIPAs.
Take this Bullfinch beer for example.
It’s a really good Pale Ale that pours a pale gold and smells of Passion flowers and strawberries.
Its malts give you a soft caramel wafer, brioche and honey body, and over this the hops provide hedgerow greenery, mango and lemon rind.
But there’s nowhere near the hit of hops that you might expect from something calling itself an IPA, unless you’re likening it to something like Greene King’s flagship drain water, and nobody wants to do that.
No, in my book Rascal is a Pale Ale, a very good Pale Ale, but a Pale Ale nonetheless.
And there’s nothing wrong with calling it that.