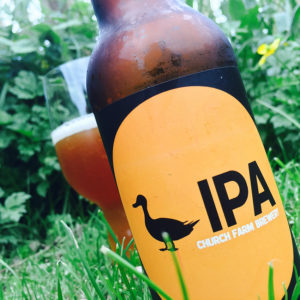 This is the second beer that I’ve had the pleasure to try from the Warwickshire based Church Farm Brewery and it’s not too shabby, except that I’d personally like a little more of an alcohol hit. That’s being pedantic though, as this rich golden beer with its little fluffy head is perfectly drinkable.
There’s a slightly sulphurous edge to the peach and straw aroma, but fortunately this doesn’t follow into the flavour too much, and inside you find a decent sweet digestive biscuit and toffee malt, some white pepper and a hint of burned caramel.
The hopping is sharp and keen, with lemon rind and hedgerow greenery creating a good bitter dry finish.
I’d be interested in trying more from Church Farm.