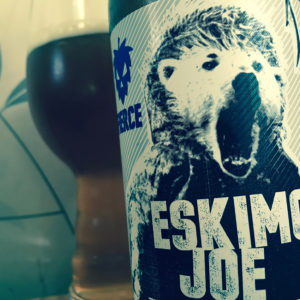 I’ve not had many Coffee IPAs, but each time I have I’ve liked the beer but been a little perplexed as to why.
I mean, think about it, we have coffee in Porters and Stouts, beer types that already have those kind of flavours, it’s easy to make sense of that.
But putting coffee, a drink that is round and comforting in a zingy sharp Pale Ale sounds odd.
Almost as odd as a Black IPA used to sound.
But Eskimo Joe, brewed with cold pressed coffee works really well.
Pouring a rich gold with a little fluffy head, the smell is honey and coffee.
The malting is a crunchy digestive biscuit and caramel dollop of mouth filling goodness, and there’s plenty of snappy fresh green herbs, lemon zest and orange marmalade from the hops.
And then there’s the coffee and its rich woody weight that’s sweetened by a hint of vanilla, making for a beer that’s at once brittle and bitter, round and chewy and holds a long smooth body in its finish from the addition of lactose.
Very interesting and very good.