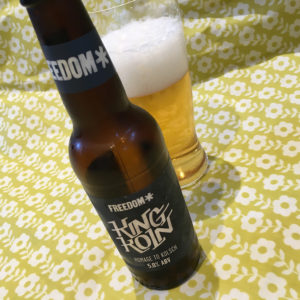 Back in the very early days of CAMRGB, I visited Freedom on their farm in Staffordshire and was shown around by the then owner, Ed Mayman.
I loved the fact that Freedom were brewing properly lagered beer at a time when it was rather unfashionable.
And they were doing it damned well too.
Cut to the present and Lager is one of thee hip beer styles for breweries to produce, and Freedom are still around.
Ed may have moved on, but the brewery is still making lagered beer better than most others.
Take King Köln for example.
It’s a lagered beer brewed with a Kölsch yeast that pours a bright gold and smells of peaches, straw and vanilla.
The malting is smooth and creamy, all brioche, vanilla ice cream and just a hint of runny honey.
Over this the hops are a sharp green herbal hit, piquant and super fresh, while the Kölsch yeast adds an earthy spice in the background.
Freedom are still way ahead of the game when it comes to lagering beer in the UK.