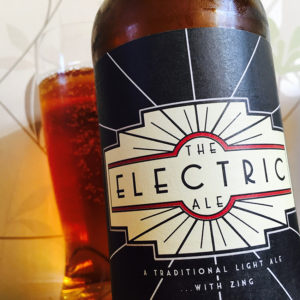 Billed as, “A traditional ale with zing,” The Electric Ale is named after Birmingham’s Electric Cinema which first opened in 1909.
This is a nice little Pale Ale that smells of orchard fruits and honey.
The malting is a soft and subtle caramel and biscuit, sultana, honey and brioche, with a brown sugar sweetness at its edges, and the mix of English hop varieties (though we are not told which ones) give a snappy and pithy hedgerow greenery, some garden herbs and a twist of lemon.
And if I was to be asked where the “zing” comes from I’d say that there appears to be root ginger added to the beer even if the label doesn’t make any mention of it*.
Whatever it is, ginger or not, there’s a warm spiciness that gives a good kick to the finish of this very drinkable beer.

*Following reviewing this beer I spoke to the brewery and there is indeed root ginger in it.