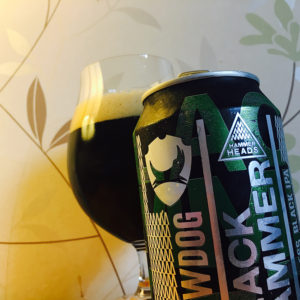 This is marvellous.
Absolutely marvellous.
The next step in BrewDog’s Hammer series, this is by far my favourite.
And I really like the original Jack Hammer.
Black Hammer is a Black IPA version with the same searingly bitter hops, all broken glass and nettles, lemon halves, limes and mandarin jelly, but here they’re tempered by dry woody coffee and dark bitter chocolate, treacle and honey from the malts.
The smell is stingingly sharp and resinous and the beer sits an unctuous black in my glass.
All this and a finish that’s almost infinitely long, crisp and bitter, but with a chocolatey peck on the cheek right at the end.
Marvellous.