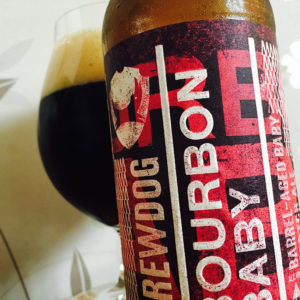 When I first had this, from Keg in BrewDog Leicester, I thought it was alright.
Not exceptional by any means, but a solid malt heavy beer with a brandy heat from the barrel ageing.
But bottled it’s a complete flop.
It’s thin and wimpy, the aroma is nothing but toffee and the main flavour when you take a swig is water.
Water and air.
There’s just nothing there.
The weediest little excuse for treacle tart malt, a polite apology for the lack of leafy hops, and the wimpiest background woody rum from the barrel ageing.
Bourbon Baby, in bottles at least, is absolutely terrible.