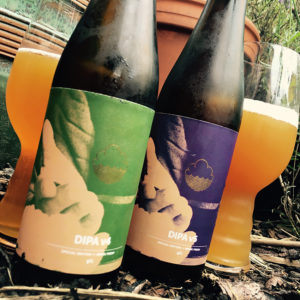 There was no other way to write about this pair of beers other than to open them both together and try them side by side.
You see Cloudwater’s version four and five of their Double IPA have been brewed with exactly the same ingredients, the only difference being when the hops have been added.
In version four the the dry hopping is done during fermentation and in version five the dry hopping has been done after fermentation.
The difference starts the minute you take a sniff, with four smelling like a fruit salad with some vanilla custard on the side and five smelling sharper and brighter, all lemon curd and pencil shavings.
The beers pour slightly differently too, though that might have just been my cack-handedness, four is a bright clear gold, while five is pale and cloudy.
Taking a swig you find two remarkably good beers with lots of lovely stuff going on.
Both have a gloopy honey and shortcake, waffle, toffee and white pepper malting that’s rich and thick and creates a big mouth filling body that you slowly chew your way through.
But as the hops start to kick in you begin to notice a definite difference between four and five.
Four is thick and sticky, almost buttery, with lots of orange marmalade, lime leaves, peach and mango, while five gives you passion fruit and melon, lemon and lime, it’s a far more zesty zingy experience than the rich undulations of four and it means that while four’s finish is resinous and sticky, five is bright and fizzy with sherbet.
Both beers are superb by themselves, but if you get to try them side by side I would urge you to open them both, sit back and take them in, and then, when you are half way down each glass, I suggest you pour what’s left into a single glass, blend them and take in the resinous and sticky, orange blossom and lemon pith glory just before you collapse in a happily drunken heap, which is where I’m going now.
Bye.