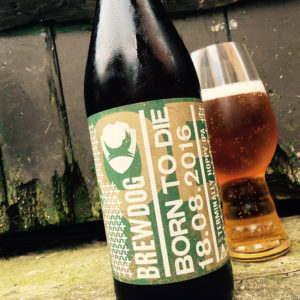 Now, I like this very much and I like BrewDog’s attempt at getting people to drink beer as fresh as possible, if that’s really what this is.
But the main reason that I like this beer is that it tastes almost identical to their Jack Hammer, which is one of my very favourite BrewDog brews.
OK, there’s a slightly heavier alcohol heat in the finish, but other than that there’s the same brown sugar and brioche malts and the same über sharp and bitter lime zest and nettle sting hops that race across your tongue at a thousand miles an hour.
What I suppose I’m getting at is that on one hand BrewDog are telling us that this beer needs to be drunk fresh, but at the same time they’re also telling us how good modern canning is for prolonging freshness by canning the hop bomb majesty that is Jack Hammer.
They also tell me in their bars that they serve everything as fresh as possible and in my local bar they give a brewed by date on their menu for their flagship Punk IPA kegs.
And so, given how quickly beer shifts across the bar and from the shelves, this whole “Born To Die” thing smacks of another good bit of BrewDog marketing.
All that said, the Born To Die 18.08.16 tastes ace.