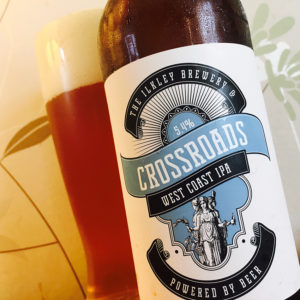 Up until now every Ilkley beer I’ve had has been filtered, which is absolutely fine by me.
But this bottle of beer has a fair amount of yeast in it and so I’m guessing that this batch of beer wasn’t filtered properly rather than it being bottled conditioned.
Either way, the yeast that’s usually filtered out has continued to do its thing and the result is that this bottle has that farty carbonation airiness and yeasty cabbage aroma that a badly bottle conditioned “Real Ale” gives you.
The malting is biscuits and caramel, and the hops don’t get even halfway to where they should be given that this is supposed to be an American style IPA and has been brewed with, “four distinctive hops.”
In fact the main flavour from the hops is a tamarind and liquorice thing, the kind of flavours more akin to British hops than American.
No, this is all wrong, from the (possibly accidental) yeast in the bottle to the hop profile.
Drinkable, but only just.