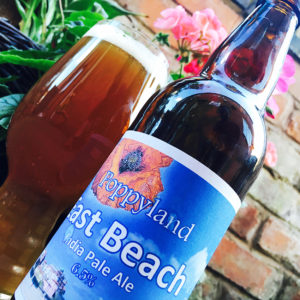 I’ve just got back home from my annual week in Norfolk.
I was hoping to catch up with Martin (@cliff_bunny) at Poppyland Brewery, but time and family commitments were against me, and so I had to settle for picking up a few of his beers from the farm shop in Cromer and this one, which I’ve lightly chilled since we arrived home, but which could probably have done with a day to rest in order to allow the sediment to settle, is as super as I’d hoped it would be.
In fact, I’m pretty sure that it’s a re-brew of East Coast IPA with a slightly higher ABV and a subtle change of name.
I may be wrong, but that’s what I’m reminded of.
Brewed with Maris Otter barley from just down the road at Branthill Farm, Wells Next The Sea, East Beach IPA is a reminder that when Martin isn’t wandering down his wonderful and imaginative experimental brewing byways, he can’t half make a good straightforward beer.
Pouring a deep gold, the beer smells of peanut brittle and peaches, and taking a swig you find a delicious honeyed toffee brioche from the malts.
They’re lightly toasted, golden syrup biscuits and sea salt, and they make for a superb body on top of which the hops are sharp nettles and fresh rolling tobacco, a swish of lemon juice and a spoonful of sticky orange marmalade.
And because this beer was brewed on the second of June this year, everything is fresh and pin sharp, totally in focus.
This is a simple beer, a delicious beer, a beer that I’m sitting in the garden with while I wish that I’d had the chance to catch up with its brewer.
Next time, Martin, next time, and in the interim I have a couple of your more experimental brews to look forward to.