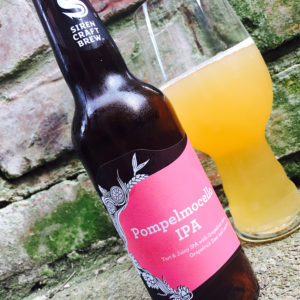 Pompelmocello è una birra che è grande e succosa, con un colore oro pallido e un aroma di pompelmo e miele.
OK, that’s enough of that.
Brewed with stacks of Enigma, Bravo and Apollo hops, all the zesty grapefruit you’d expect from such a selection is boosted by fresh grapefruit zest and juice.
It makes for a beer that is intensely crisp, bordering on sour, pin sharp, but sadly lacking some body as the malting struggles to be found under the tongue twisting top end.
The addition of lactose is an attempt to create some much needed roundness and sweetness, but for me everything is far too weighted in the direction of the über bitter citrus tang.
Buona, ma non ottimo.