The Fall & Fall Of The Village Inn, West Runton 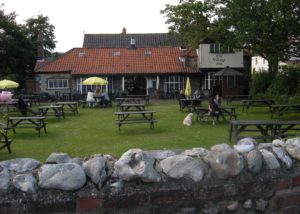 This is a beer blog and a beer organisation, but I feel moved to talk about food and service for a moment.
You see, once a year my family travels to West Runton, Norfolk, for a holiday.
We stay at the same place and our local pub is The Village Inn.
In the past the pub has been alright, with beer that’s unsurprising but generally well kept – there’s usually a choice of something from Adnams, Grain and either Wolf or Lacons, as well as the usual lagers and ciders.
I often have two or three afternoons there, and more often than not we have at least one evening meal with them.
But this year will be our last.
There were eight of us in total this year and we ventured down to the pub on the first night of our holiday.
We ordered a couple of rounds of drinks and a meal each.
And we waited.
And waited.
And after an hour when I’d been to the kitchen to question where on earth our food was, it suddenly appeared.
But it was very very bad indeed.
My daughter’s macaroni cheese was oily and split, looking for all the world as though it had been reheated several times, and my partner’s veggie burger was a microwaved pattie in a bun with absolutely no relish.
When we asked where the coleslaw was we were told that they had, “run out”.
No apology, no offer of anything else to put in the burger, just that they didn’t have any.
My son’s chicken nuggets were heated up from the freezer and everyone’s chips were limp and oily.
And then my steak and the steaks for my two sisters in law arrived.
They’d ordered medium rare and I’d ordered rare.
All three were the same insipid grey colour, mine having the addition of a large edge of fat that hadn’t been cooked at all, even though they’d managed to turn the rest of the meat into a window putty grey.
We complained and to give the duty manager her due, she was apologetic and polite and gave me a full refund.
The meals had come to ninety seven pounds.
A day or two later and still upset by the experience of being so disappointed by what was a traditional family outing, we took a look at reviews of The Village Inn on Trip Advisor and it seems we’re not alone.
You can read the reviews here.
The most worrying one is the fine for poor hygiene standards.
We’ll never be going to The Village Inn again, and I’d advise all of you to steer well clear.

Founder of CAMRGB. Member of The British Guild Of Beer Writers. Leftist bigmouth. Old and grumpy.
View all posts by Simon Williams →
This entry was posted in CAMRGB, Pub Review. Bookmark the permalink.