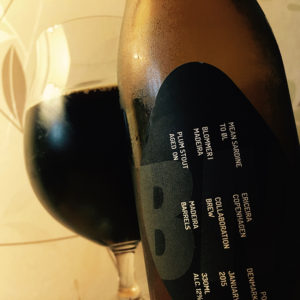 I don’t care what you think.
I don’t care what you have to say.
Just because a beer is hellishly expensive, has a massive ABV and has been aged in barrels of some description doesn’t mean that you have to like it.
This beer is a waste of a tenner.
A complete waste.
It’s thin and insignificant.
Brewed in collaboration with Mean Sardine and using fresh plums that you can’t taste, it’s a Stout that has been aged in Madeira barrels.
What you find is a beer that pours a nice inky black but lacks anything much of a head, save for the limpest ring of bubbles.
And that is because it’s almost entirely flat.
So flat in fact, that the beer feels oily and slippery as you drink.
Sure there’s some chocolate and coffee, treacle and burned toast, some red crunchy autumnal leaf litter and a big boozy warm thump in your chest, but the barrel ageing adds nothing more than a thin and weary damp woodiness, a poor excuse for an Imperial Stout, the booze builds into a nasty scorching burn.
Nope, this is bad.
Really bad.