Against The Grain Brewery The Brown Note (5%) 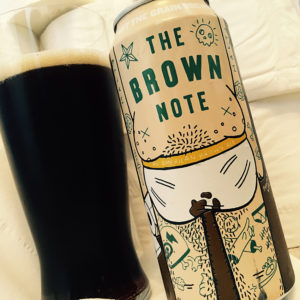 Sometimes looks can be deceiving.
Sometimes things are all form over function.
This is a case in point.
I absolutely love the artwork for this can of beer.
The illustration is irreverent, the blurb on the back of the can is naughty and funny.
But this is nowhere near the, “Brown Ale to end all Brown Ales,” that it tells us that it is.
In fact, it’s just a plain old Brown Ale that’s drinkable but completely unexciting.
It pours a mahogany brown and smells of digestive biscuits and toffee.
Taking a swig you find more biscuits, more toffee, a little honey and a little tamarind, along with some half arsed brittle autumnal leaf litter hops, a touch of nettle tea and a dab of lemon rind.
And that’s about it.
An OK beer that’s drinkable, but at UK import prices isn’t worth the money.
Flattering to deceive.