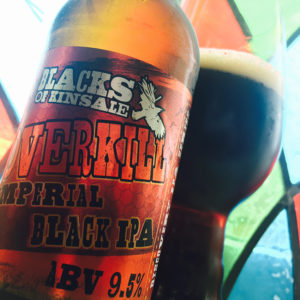 Overkill is Blacks’ Imperial Black IPA and it’s really rather good.
Pouring a deep dense mahogany with a little foamy head, the smell is plums, molasses and strawberries.
Taking a swig you find a beautifully balanced beer that, unlike many Black IPAs, doesn’t get weighed down by its malts.
You know, you often find that a Black IPA leans far too close to a Porter or Stout, with its hops just an aside, but here you get liquorice root and coffee beans, prunes, honey and treacle, but it’s light and airy and soft and over it the hops are sharp and green, fresh and herbal and lively with sherbet lemons, orange marmalade and lime leaves.
All this and an ABV that is dangerously well hidden.
This is a very good beer indeed that shares a name with one of my very favourite Motörhead songs.