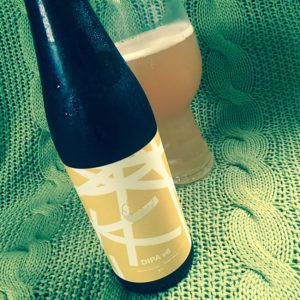 This pair of DIPAs from Cloudwater are all about what yeast can do to a beer, both beers being exactly same except for the strain of yeast that’s been used.
Version six uses a strain called WLP4000 and is a bright golden beer that smells intensely fruity, round and sweet and very much like a fruit jelly with a little bread dough in the background.
Taking a swig you find a solid malt body, all caramel and sticky toffee, shortbread and pancakes, and then there’s a little peppery earthiness and a round creamy, almost puddingy feeling that’s akin to a lovely crême brûlée before the hops go ballistic on you with sharp green pithy herbs, guava, orange zest and sherbet lemons.
And then in the finish everything rounds back out into a soft fizzy fruit sweetness.
Version seven uses a JW Lees yeast strain, one of the oldest in the UK, and the change is marked.
Gone is the big fat fruit basket of an aroma, replaced by a spicy, almost woody musk with a hint of apricot. 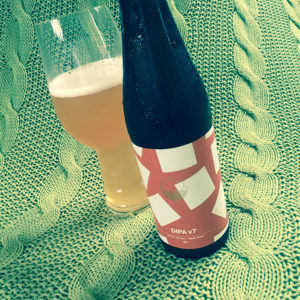 And the flavours are very different too, the beer is no longer a big round chewy beast.
Instead the body is sharp and metallic, the toffee and pancakes of the malting bashed about by a steamy, almost fungal earthy spice from the yeast.
And what this does is bright the hops up, makes them far sharper, far more astringent than they were when wrapped in the soft fleshy pillow of the WLP4000.
Don’t get me wrong, both beers are an absolute delight and if you can try them together I suggest that that’s what you do, but if you can only get hold of one of them, my favourite is six, but you’ll be more than happy with either version.
And finally, in passing, I need to mention how beautifully designed the labels are and moreover, how they remind me of Kim Hiorthøy‘s design work for my beloved Rune Grammofon label.
And that would make sense knowing that certain persons at Cloudwater have a bit of a thing for Norwegian experimental and electronic music.