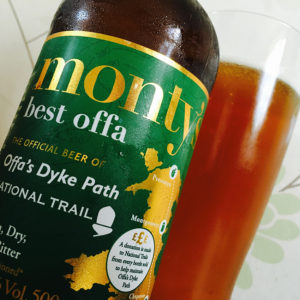 The official beer of the Offa’s Dyke Path is a decent enough Golden Ale that pours a bright gold and smells of hay bales, bran and honey.
And that’s pretty much where the flavours start and end.
This is a Golden Ale after all.
So there’s biscuits, lots and lots of biscuits, almost too many biscuits, they’re crunchy and dry and rich with bran, a little bit of honey and then some mown lawns, hedgerows and a twist of lemon from the hops.
And that’s your lot.
Mind you, if you’d just walked Offa’s Dyke on a hot sunny day, you could do much worse.
Especially if you like biscuits in your beer.