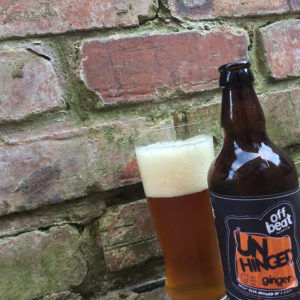 Fiery root ginger to the max, this is a very refreshing beer, if you like ginger.
And I do, which is lucky.
Especially ginger that’s been boosted by a hit of chilli.
Which Unhinged is.
You see Michelle has brewed a Ginger Beer in the truest sense of the term, and then she’s added a blast of chilli flakes so strong that my lips are tingling in the most delightful way.
Unhinged pours a rich gold with an enormous cumulonimbus for a head and it smells of ginger.
Taking a swig you find that the beer shows you a decent biscuit and toffee malt before sweeping it away with a big gingery broom.
The ginger really does take over, it’s edged with a round brown sugar sweetness, but this is definitely an alcoholic Ginger Beer rather than a beer with ginger in it.
And with each swig the chilli heat glows and grows.
I like it a lot, though you might not.