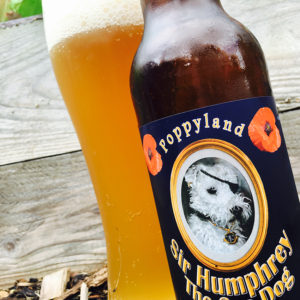 Brewed especially for the Cromer Farm Shop, which is where I usually pick up my Poppyland beer if I can’t get in to see Martin at the brewery, this is a Hefeweizen with Japanese hops and lemongrass.
On the whole it does what you’d expect a Hefeweizen to do, with smell of banana and a light clove hum from the yeast as you pour the beer with its big fluffy head into your glass.
There’s a caramel and wafer malt, honey rich and prickled with white pepper, and a decent blast of fresh herbal leafy foliage from the hops that slowly build into a keen and slightly astringent lemon zest and lime leaf sharpness that borders on the sour but just manages to stay on the right side of the tracks.
Not one of Poppyland’s best, but still eminently drinkable.