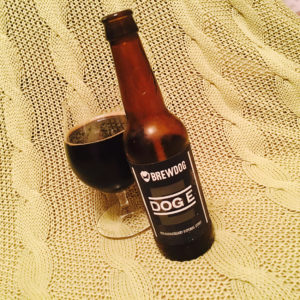 Originally brewed as part of the Abstrakt range to celebrate the brewery’s ninth anniversary, Dog E is a massive Imperial Stout brewed with cocoa and coffee and Naga chillies, and it’s very good indeed.
Pouring an inky black, the smell is plums and window putty, prunes and blackboard rubbers.
Taking a mouthful you find a massive round chewy bitter chocolate and fresh espresso malt, lots of charcoal and wholemeal toast, heather honey, tamarind and molasses from the malts.
They’re super sticky, super rich and they go on for miles, bordered by meaty Marmite smothered writing desks.
Does that sound odd?
It shouldn’t.
Think of the way an old bureau with its inlaid leather writing pad smells in a dusty drawing room.
Got it?
Yes, it’s that.
Over it there’s a decent autumnal red leaf litter crunch from the hops and a slow burn from the chillies that builds mouthful by mouthful until your tongue prickles with heat, adding a piquant hit to the rind fruity brandy finish.
Majestic.