They’re not in Canning Town, but it made a good headline, OK?
When my brothers in beer, Kal and Jaz at Cotteridge Wines, told me that Brodie’s had started canning their beer and that they’d snagged a load for the shop I just had to get hold of some to try.
To begin with they’ve canned some of their core range, which is the logical thing to do, but it meant I couldn’t drink their mental Stouts in a can just yet.
But that’s OK, because the beer that I got is good. 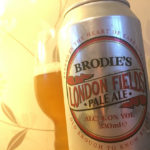 Very good, tasting extra fresh and crisp, the first beer I poured was their London Fields Pale Ale (4%) with its sharp lemon elder aroma and pale golden body.
The malting is soft and gentle, with runny honey and shortcake, an the hops are extra sharp and bitter sherbet lemons, melon, nettle tea and steely herbal leaves.
But most importantly, the beer felt super crisp and fresh. 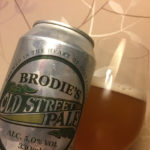 Next I opened the Old Street Pale (5%).
It looked very similar to London Fields but the aroma is far rounder, with vanilla and apricot coming to the fore.
The malting is creamy and smooth, brioche and caramel, and there’s a good blast of freshly rained on hedgerow greenery, it’s sparky and zingy, with mango and lime leaves humming around the edges. 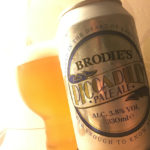 The Piccadilly Pale (3.8%) wasn’t overly exciting, not being very far from the London Fields Pale, with a very similar subtle honey and shortcake malt and just a slight change in hops that takes the sharp lemon aroma and replaces it with orchard smells while the hops give lemon and lime and grapefruit and some furry apricots.
But still, the canned freshness is there. 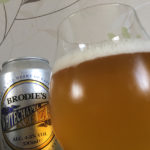 Next up was Whitechapel Weizen (4.5%) which is absolutely packed full of hops.
They’re big and bitter, herbal leaves and lemon rind, grapefruit pith and nettles, and they its on top of a soft and sleek creamy malt that provides honey waffles and Weetabix. 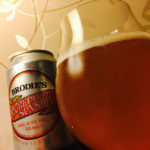 Shoreditch Sunshine (3.9%) is another Pale Ale, but this time it appears to have all sorts of Antipodean hops in it so that you get mango and guava, fern leaves and satsumas over the soft waffle malts.
Finally I opened the Jamaican Stout (5%) and it was the weakest of the range. 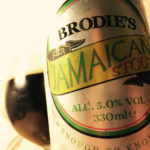 Don’t get me wrong, it’s still a decent little beer, it’s just a little bit thin.
You get all the flavour you want, from chocolate and coffee to burned brown bread and honey, molasses, red leaf litter and plums, it’s just that the body of the beer feels really thin and watery.
All in all, Brodie’s moving their beer into cans is a good thing.
Lots of well made beer presented in the freshest way possible, rips and fresh and lively.
If you get the change, go grab some canned Brodie’s.
You won’t be disappointed.