Ignore The Machine: The International Project 2016

I’ve not bought the Rainbow Project beer before because I’ve been a little nervous about just how pretentious the whole idea feels, and I’ve not really wanted to get involved, not to mention finding it all a bit too expensive.
But this year I thought I’d take a punt.
I wish I’d not bothered.
Seven British breweries that I like very much have joined forces with seven New Zealand breweries – some of whom I know, others I don’t – to make a selection of beer that are, on the whole, so middle of the road that I’ve gone past disappointment and into regret.
Regret at chucking forty odd quid away.
I had a bad feeling when I opened my box and read the literature that comes with the range.
There were just too many words.
The descriptions try far too hard.
Something good, be it a beer or a book, a song or a meal, barely needs any words at all, and certainly doesn’t need to have an in depth account of what you ought to be tasting.
I’ll put the pouring down the sink of forty quid down to experience and I’ll not be taking part again.
This is what I thought of each beer: 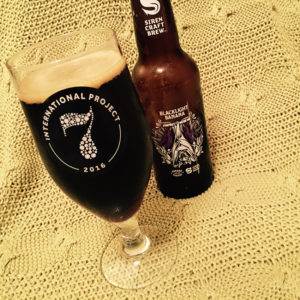 Siren Craft Brew & Garage Project Blacklight Banana (9.2%)
I’m told that this Stout has been brewed with a shed load of bananas as well as bourbon barrel aged coffee and molasses.
As it goes it’s an alright Imperial Stout and you can really taste the coffee with its round damp woody barrel edges, but bananas?
Nope.
The molasses give an overly sweet stickiness, black and gloopy, it’s not bad at all, it’s just not anywhere near the amazing brew you’d imagine if you read the literature that accompanies the 2016 Rainbow Project beers.
Blacklight Banana pours an inky black and smells of brandy soaked plums and coffee.
The malting is burned wholemeal toast, honey and charcoal, and there’s a decent crunchy autumnal red leaf litter hopping along with a dab of orange marmalade.
This is a good Stout, but I can’t find the bananas anywhere. 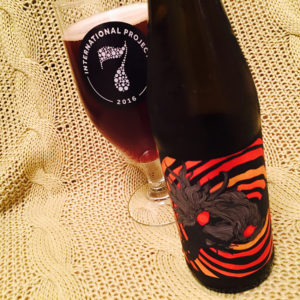 Beavertown & Parrotdog Universal Mind (10.5%)
The label says “Universal Mind” and the Rainbow Project booklet says “Universal Mild”, and the Mild title is far closer to the mark.
This is actually an Adambier, a style from Dortmund that’s rather rare these days.
It’s a beer that spends a long time ageing in wood, this version is made lightly smoky by the addition of peated malt before the barrel ageing.
But ultimately this tastes like a decent Mild with a shed load of alcohol added.
There’s the prunes and chocolate of the malts, the crunchy woodland leaf litter of the hops, and a soft prune fruitiness in the finish.
This is a nice beer, a Mild beer, especially if you like your Milds with a shot of brandy to finish them off. 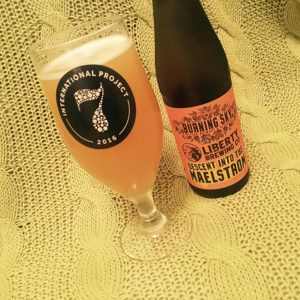 Burning Sky & Liberty Brewing Co. Descent Into The Maelstrom (6.66%)
I like the orangey flavours and I like the pithy gooseberry flavours.
I like the light citrus aroma and I like the cloudy peach colour.
But what I don’t like is the feel of this beer.
It leaves a very similar butteriness on your tongue that you get after you’ve been sick.
It kind of glues itself there and won’t go and it did nothing more than to make me really want a pint of water to try and wash it away.
The Belgian yeast doesn’t add much other than a little background earthiness, and the wine barrel ageing is noticeable by not adding anything much at all save for a dreary dampness at the edges.
Oh dear, I’ve just found that if you burp the beer starts to become rather bilious.
I poured it away. 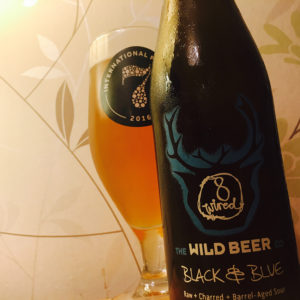 Wild Beer Co. & 8 Wired Black & Blue (5%)
An un-hopped and un-boiled “raw” beer, Black & Blue is alright, though I can’t find any of the peppercorns that I’m told are used in the brew.
This is a soft and drinkable sour beer with a dewy orchard aroma.
Taking a swig you find a light sourness, akin to a dry cider, there’s apples and pears and just a hint of creamy caramel.
But that’s about your lot.
Pleasant enough, if unexciting. 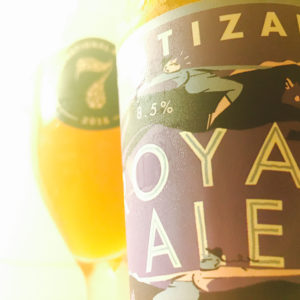 Partizan Brewing Royal Ale (8.5%)
Partizan got to brew their collaboration alone as the brewery they were supposed to work with pulled out at the last minute.
That makes me wonder whether this beer should even be included in the range, but who am I to say?
Royal Ale is a Barley Wine with Riesling grape juice added, and it’s OK even if my bottle was almost entirely flat.
You get all the Barley Wine stuff you expect, sweet burned brown sugar, toffee, some herbal hops, and then the grapes come in and feel like a completely separate drink.
It just doesn’t sit right in the brew.
In fact the more I drink it the more confused the beer becomes.
Halfway down my glass I poured it down the sink. 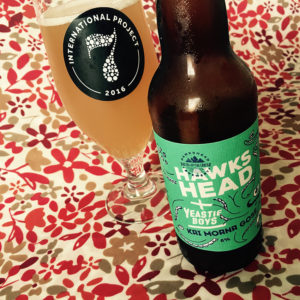 Hawkshead Brewery & Yeastie Boys Kai Moana Gose (6%)
Brewed with mussels and oysters, yoghurt, rock salt and gooseberries, this is really trying far too hard and the result is that it’s all very confused and quite unpleasant.
Pouring a dim and cloudy apricot colour, the smell is a little honey and some sweet fruitiness.
But on taking a swig I found it difficult to work my way through all the different flavours, from the pithy gooseberries to the lemon and green grape slap of the hops, the saltiness that pervades the beer could be seafood or it could be rock salt, and the yoghurt makes the beer feel far too oily and creamy in all the wrong ways.
Yet another beer that I found myself pouring down the sink. 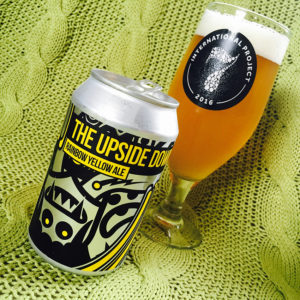 Magic Rock Brewing Co & Fork Brewing The Upside Down (6%)
Finally a beer that’s more than half decent.
This collaboration, perhaps named in honour of the Netflix series Stranger Things, is a kettle soured, fruity Witbier.
The turmeric adds a light yellow sandy glow to the beer and the coriander gives a fresh leafy edge to the fruit salad aroma.
Inside you’ll find a malt that’s soft and light, creamy on your tongue, with waffles and salted caramel, honey and ice cream cones.
The hops are crunchy and bitter and fresh, nettle tea and hazel, gooseberry and lime leaves, and the passion fruit and mango add a fleshy fruitiness that tingle against the light metallic sour background hum.

One Response to Ignore The Machine: The International Project 2016