Now What You’ve Done To My World: CURED At BrewDog

Posted on September 3, 2016 by Simon Williams 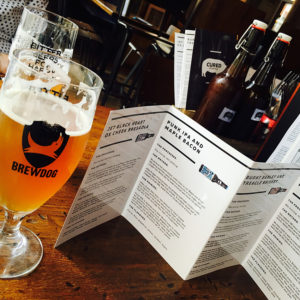 I popped into my local BrewDog yesterday as they have a new range of food available and I was intrigued.
You see, BrewDog Leicester opened with the usual BrewDog menu of burgers and fries but it didn’t last long before it was changed to a short list of pies and mash, and then a few weeks ago the word CURED, all in capitals in the true shouty BrewDog way, started appearing in the bar.
And yesterday the new menu was unveiled.
CURED features a range of charcuterie and side dishes conceived and produced by Chef Martin Powndrill, formerly of The Smokehouse in Leicester, and it’s inventive and really rather good. 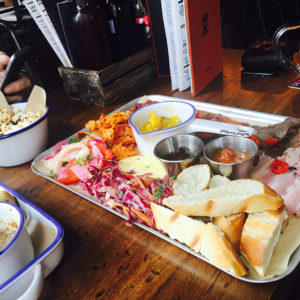 There’s a bacon cured in Punk IPA, an ox cheek brined in Oatmeal Stout, salmon pastrami made with Smoked Porter and a burned barley an treacle brisket.
All the meat was flavoursome and rich, presented with side salads of coleslaw and pickles, fresh crusty bread and butter, and I opted for a couple of side dishes that would also have worked very well as simple bar snacks to go with you beer.
The pretzels, though not pretzel shaped came with a very good mustard dip and the seaweed and chilli pop corn was a particular favourite, its salty heat cutting across my glass of Lost Industry Fuss Double IPA (9.2%) with its enormous chewy toffee body and sharp bitter citrus and resinous pine hops. 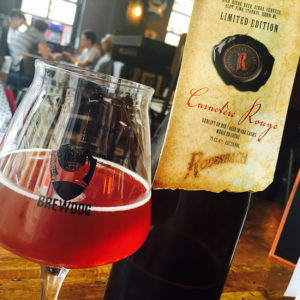 Chris and I had ordered the large platter between us and it was plenty as lunch for two, and worked really well to pick at as we chatted and drank.
I didn’t try any of the desserts as I’m not a big dessert eater, though I noticed beer doughnuts in bourbon sauce on the menu and for a moment thought I might take the plunge, but instead our dessert came in the form of a delicious bottle of Rodenbach Caractére Rouge (7%), its warm leathery body and its soft fruit flavours topping off the meal beautifully.
The new food range at BrewDog Leicester is worth checking out, CURED is very good, and I hear they are offering a Hangover Club on a Sunday morning which will involve American style breakfasts and computer games.
I may need to get me a hangover at the weekend.

2 Responses to Now What You’ve Done To My World: CURED At BrewDog