Posted on September 9, 2016 by Simon Williams 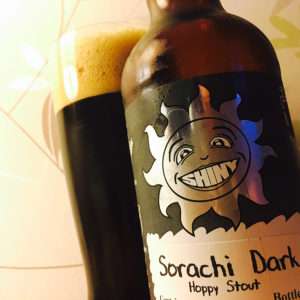 I really want to like Shiny’s beer, but I always find it only alright at best.
Take this “hoppy stout” as an example.
It pours alright, a deep dark purple brown with a fluffy head, but get your nose in and it’s all a bit thin, with an aroma that hints at chocolate and prunes but is altogether far too gassy.
Then you take a swig and find some chocolate and some raisins, some honey and digestive biscuits, but this, according to its name, is brewed with Sorachi Ace.
And Sorachi Ace is a hop known for its big bold flavours.
But they’re not here.
There’s some lemon and some lime leaves, some herbs and some rolling tobacco, but again it all tastes a bit thin, a bit flimsy.
The finish is far too airy, blowing away the initial sweet and bitter tingle too quickly to enjoy.
Yes, I really want to like Shiny, but they’re not quite there.