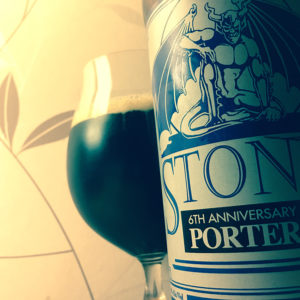 I believe that this is a beer that’s been re-brewed as part of Stone’s Anniversary celebrations.
Whatever it was brewed for, even if it was just because they wanted to brew a lightly smoked Porter, this is rather good.
It pours a deep dark purple brown and smells of black cherries in leather satchels.
There’s a rich and thick malt body that’s full of chocolate and prunes, pumpernickel, coffee and fireside cinders.
You see, this isn’t quite a Rauchbier, but it gives you lots of bonfire woodiness through which the hops peep out with orange marmalade and lemon zest, pumpkin seeds, garden herbs and pine wood resin.
The finish is gloopy chocolate and espresso, hazelnuts and steely basil.
All in all, an anniversary beer that’s well worth celebrating.