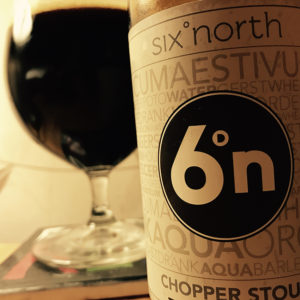 6 Degrees’ Stout is a decent little bottle of purple brown delight, with its plum compote and hyacinth aroma and its fizzy cappuccino head.
Inside there’s a great big burned wholemeal toast, buttered biscuit, treacle tart malt.
It’s rich with coffee and prunes, figs and a hint of anchovy, and the snap of dry pithy hedgerow greenery from the hops adds a much needed bitter freshness.
And all of this is super, but there’s a gassiness to the beer that makes everything feel rather thinner than it should.
I could see it when I poured it into my glass and the froth of the head looked too bubbly, not creamy enough.
It’s not enough to spoil the beer, it just leaves everything feeling slightly more watery than you’d expect from a seven percent Stout.