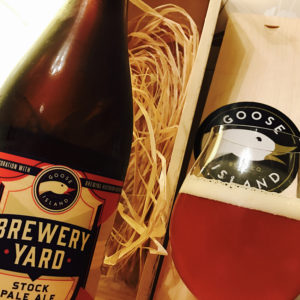 Brewed in collaboration with brewing historian Ron Pattinson, Goose Island have attempted to brew a faithful recreation of a 19th Century Burton recipe.
And regardless of whether they’ve got it absolutely right, which I suppose is something that we’ll never really know for sure, Goose Island have created a superb beer.
Two and a half years in the planning, Brewery Yard – named in honour of the way that the Burton Brewery used to stack their barrels in the brewery yard, exposing them to the elements and allowing secondary fermentation that both preserved the beer and created the unique flavours – involves classic English malts, Golding and Cluster hops and a whole eleven months in oak barrels with only Brettanomyces for company.
The result is fabulous.
This is proper beer.
Beer to take your time over.
Beer that your friends probably won’t like.
It’s rich and sharp and bitter, sour and creamy, it pours a rich amber and smells of ripe Camembert, damp straw and red berries.
There’s a soft and sweet sticky caramel and pancake, honey and toasted waffle malt, some white pepper, a little dried mixed herbs and some lemon rind in your first mouthful.
And that’s a good place to start.
But there’s far more to this beer than that, even though this isn’t a beer you can take apart.
No, this is one of those beers that is greater than the sum of its parts.
You see, the Brett creates a warm mushroom and damp woodland leaf litter dirtiness, and there’s an absolutely lovely pithy lip-drying leathery tannin thing from the barrels that curls your teeth and drives you to take another sip if only in the vain attempt to replace some much needed liquid to our head.
If this is the kind of beer people were enjoying all those years ago, I wish I could visit a pub back then.
I’d also like to come clean and say that I was ready to write a terrible review about this beer.
I had almost convinced myself that it would be terrible just because of its provenance.
But this is an absolutely fabulous beer that has only seen the light of day in a few beautifully presented bottles.
If you see one buy it, you’d be a fool not to.