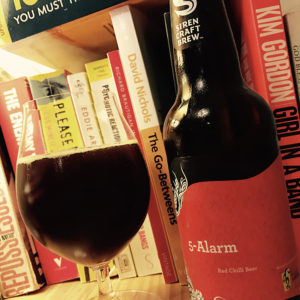 Brewed in collaboration with Hoppin’ Frog, this would be my favourite ever Chilli beer if it wasn’t for Green Flash’s Dia De Los Serranos.
That’s a quite a big call, isn’t it?
But there’s a very good reason for it.
You see this is a Red Ale and so, unlike with so many chilli beers that are brewed with a pale malt bill and a shed load of hops, a heated up IPA if you like, this beer has a deliciously sticky sweet honey and treacle tart malt.
And that sweetness is magic against the heat of the chilli.
The beer pours a deep dark ruby red and smells of roasted red peppers, honey and spicy plums.
Taking a swig you find that lovely chewy sticky sweet malting and an autumnal red and crunchy leaf litter hopping, some lemon zest and orange marmalade.
And then there’s the chilli.
It’s fiery and chest warming and the booze adds a brandy depth to the burned Demerara sugar finish.