Posted on November 3, 2016 by Simon Williams 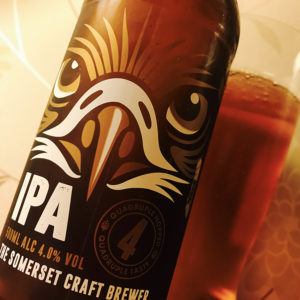 A decent beer this might be, but it’s far more akin to a well made Golden Ale than an IPA.
Pouring a bright gold with a little tiny head, the smell is honey and straw and garden flowers.
The malting is dry crunchy biscuits, honey and a little cinder toffee, it’s round and chewy and enjoyable.
The bottle’s label tells me that the beer has been hopped four times.
That may well be the truth, but from the flavour, I’d guess that each time the hops were added they only used a coupe of cones.
There’s a pleasant enough hedgerow and herbal greenery thing with a little aniseed at its edges – all very English and all very pleasant – but there’s nowhere near the intensity you’d expect from an IPA.
If you see it, try it, it’s rather drinkable, it’s just not an IPA by any stretch of the imagination.