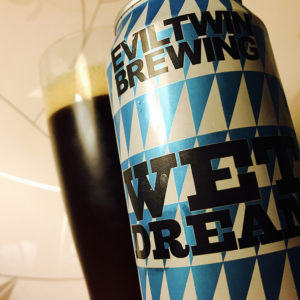 It’s probably not the done thing to say something negative about Evil Twin as they’re super cool right now, but I’m going to anyway.
Wet Dream is just about OK, and that’s about it.
A Brown Ale brewed with coffee could and should be super, and the beer certainly looks and smells good, its deep chestnut body and foamy head looking all sexy in my glass while a very nice coffee and toffee aroma drifts up at me.
But there’s a really harsh bitterness at the back of this beer that spoils it for me.
I want my Brown Ales to be soft and round, a little bit nutty and a little bit chewy.
This starts off like that, with a decent caramel and biscuit body and some maple syrup and herbal leaf hops.
Sadly, it’s the coffee that lets the beer down.
The first sip is warm and woody, toasty and rich, but it very quickly disintegrates into an overly harsh and bitter yesterday’s grounds horror.
Nope, I don’t like it.