Posted on November 1, 2016 by Simon Williams 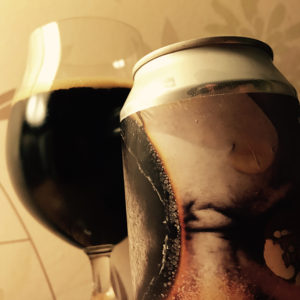 Being number one in Northern Monk’s Patrons Project and brewed with Tom Joy and North Star Coffee Roasters, I first tried this beer at IMBC and wasn’t unimpressed, finding it little better than OK.
But here at home and from a delightfully designed can I rather like it.
In fact I really like it.
Pouring an inky black, the smell is coffee and treacle tart.
And that’s pretty much where the initial flavours lay, with a big comforting treacle tart heart, lots of honey and some plum jam over a deep warm black coffee kick.
There are some chestnut and bramble jelly hops that add a lick of orange marmalade and some pithy hedgerow leaves before the coffee drifts back in with the treacle toffee finish.
Much better than I initally thought.