Posted on November 5, 2016 by Simon Williams

Jimmy at Lost Industry doesn’t appear to sleep.
Instead he can be found in his little brewery just outside Sheffield making endlessly interesting and enjoyable beer styles.
One of his latest ideas is to use seasonally foraged ingredients, and one of the first of these beers is reviewed below.
Sitting in a pub in Sheffield with him a few weeks ago we talked over a beer or two and he was as warm and friendly as ever, interesting and interested in everything, he makes a very good drinking partner.
Some of his beer has been rebadged and sits on the bar at his beloved Sheffield Wednesday FC ground.
Because he can make very good straight forward beer when he wants to, but what fires him up the most is experimentation and exploration.
Like the beauties below. 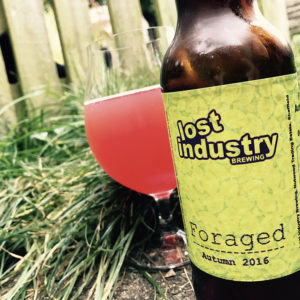 Foraged Autumn 2016 (4.7%)
Brewed with locally foraged Tayberries, Elderberries and Blackberries, Jimmy tells me that he is interested in doing more seasonally foraged beer and if this little bottle of loveliness is anything to go by, I hope he goes for it.
Pouring a beautiful pomegranate pink, the smell is a fresh soft wild berry salad, round and fleshy and inviting.
The berries pop and burst with life when you take a swig, they’re nice and sweet and juicy and have a crisp clean tartness at their edges.
And that’s the thing with this beer, it might be billed as an Autumn Berry Sour, but it’s more tart than sour, the malting giving you a decent honey and French bread backbone and the hops adding a little kick of peppery hedgerow.
And there’s an earthiness from the yeast too, adding a warmth and depth to the bright clean bitter finish. 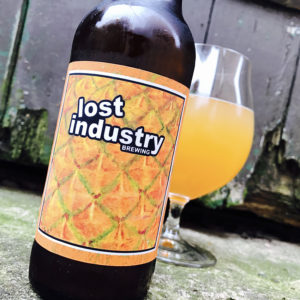 Pina Colada Sour (6.1%)
Following on from their Mohito Sour, Lost Industry have gone for a Pina Colada and it works rather well.
It pours, unsurprisingly, the colour of pineapple juice and smells of pineapple chunk sweets.
You get an instant hit of booze and pineapple juice with your very first mouthful, it’s bright and fresh and juicy, and slowly the malting builds into a solid shortcake and honey backbone over which there’s a decent lick of steely herbal greenery from the hops.
The lactose adds a soft smooth body to the beer and it’s only the coconut that is harder to pin down, though you can find it if you take your time and concentrate.
The beer finishes with a sharp bitter tang that leads you to your glass for another mouthful.
Very nice. 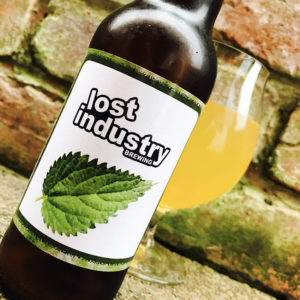 Nettle Gose (5.3%)
I’m not a big fan of this beer style, but Lost Industry have pulled it off rather well in my opinion.
This beer pours a pale gold and smells like the top end of my back garden, that is of sweet leaf mulch, mown grass and honey (though granted there’s not a lot of honey in my garden).
Taking a swig you find an earthy peppery prickle on your tongue from the nettles, a good caramel and wafer malt body, and then some lemon rind and steely basil leafiness from the hops.
And to top it all off, in the finish there’s an almost mushroomy earthiness, some pithy sapling wood and a lip puckering salty smack.
Lovely stuff.