Posted on December 2, 2016 by Simon Williams 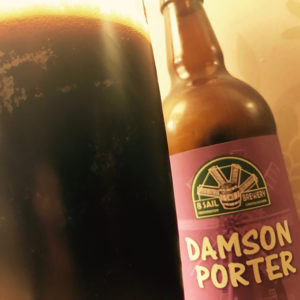 I wanted to like this so much more than I do, but this is pretty mediocre truth be told.
A Porter brewed with damsons, the beer looks nice enough, sitting a deep chestnut brown in my glass.
The aroma is a light woody coffee and toffee, which isn’t too bad, but the problems started when I took a swig.
The malting that ought to be round and biscuity, warm with toffee and maybe even a little treacle tart, is destroyed by an overly tart and unpleasantly pithy damson presence.
And it’s a shame as I for one like a damson Porter, I like how the dark purple fruit adds a subtle juicy fleshiness, but here it’s too astringent and as a result it scrubs everything else away.
I poured it down the sink.