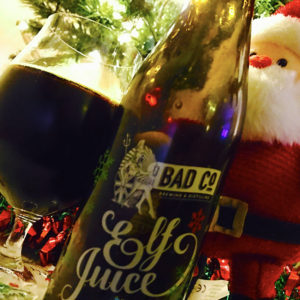 A very Christmassy Spiced Ale packed with ginger and nutmeg, cloves, cinnamon and vanilla, Elf Juice pours a deep Ruby red and smells of chocolate and mulled wine.
But then that’s not really a surprise is it?
The malting is rich and round, all coffee and treacle toffee, brown bread and honey, and the hops add a spiky herbal hedgerow greenery.
But it’s the mixture of spices that make this just right for these dark nights in the depths of December, it’s warming and rich and really rather splendid.

Founder of CAMRGB. Member of The British Guild Of Beer Writers. Leftist bigmouth. Old and grumpy.
View all posts by Simon Williams →
This entry was posted in Beer Review, CAMRGB and tagged Christmas, Christmas Beer, Spiced Beer. Bookmark the permalink.