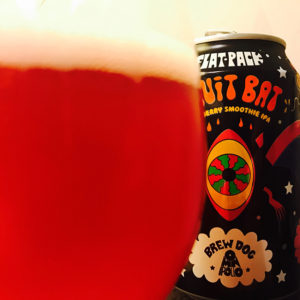 Unlike Omnipollo’s other smoothie and ice cream beers, or even the ones brewed with Buxton Brewery, that are thick and rich and creamy, this “Raspberry Smoothie IPA” that they have brewed with BrewDog is thin and acrid and rather unpleasant.
There’s no discernible malts which means a great big gap right in the heart of the drink, and as a result the raspberries are a little too sour and the vanilla is nonexistent.
In fact, as you drink, the whole thing becomes a rather sickly and slightly bilious exercise in getting beer wrong that ends with a great big watery feeling as all the flavours disappear almost as soon as they arrive.
Terrible.