Posted on December 5, 2016 by Simon Williams 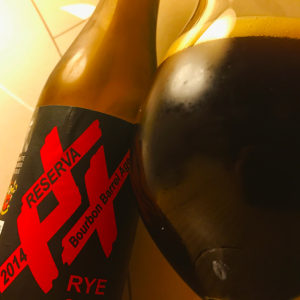 I don’t usually write about Belgian beer because it’s all been written about so many times before, and often described much better than I ever could.
But this is superb.
A Rye Quad aged in Bourbon barrels, the beer pours a dense mahogany red and smells of rum and honey and cherries.
And the cherries jump out in the flavours too, giving you a Black Forest gateaux of a body, chocolate and rum, pumpernickel, honey and lots and lots of fruit.
It’s round and chewy and delicious and the hops add a sharp keen herbal leafiness that cuts across the treacle tart, brown sugar and damp wood of the barrels.
There’s a chest warming booze heat and a refreshing Dandelion and burdock finish to boot.
Super.