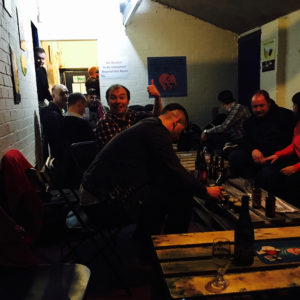 A small crowd gathers for beer & music at Cotteridge Wines.

It’s been a funny old year, a year in which I’ve not got anywhere near as much done as I’d have liked.
A year that saw far less CAMRGB events than I’d have hoped.
Mainly that has been down to me and real life, day jobs, etc getting in the way.
But this year has been positive and interesting in lots of ways.
Back in February we had the first (and so far, only) CAMRGB Music & Beer event at Cotteridge Wines (@cotteridgewines), with a small but friendly crowd of beer lovers enjoying a couple of hours that involved guided beer tasting, stories and live music.
It’s something I want to do more of, and I will, if I can find the time.
Then in April there was the comedy highlight of the year when a head honcho of CAMRA appeared on Breakfast TV to say that there is, “no such thing as Craft Beer,” only to then invent other forms of beer that CAMRA supported, including, “Luscious Ale.” 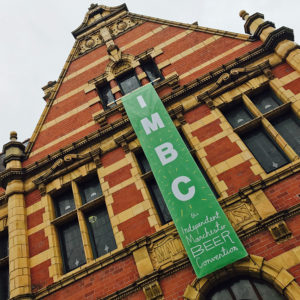 It was raining in Manchester.

Later in the year I enjoyed the LCBF and IMBC, and CAMRGB membership finally rose about the one thousand mark.
I also came very close to a job in the Beer Industry but decided that I’d rather stay where I am and keep CAMRGB alive and, most importantly, independent and objective.
But if truth be told, there wasn’t too much CAMRGB activity because I, like so many people, have been thrown by world wide events, from Brexit to the American election, the plight of refugees to the lorry attack in Berlin (that happened just yesterday).
It had me struggling to gain control over my mental health – an ongoing issue that I generally deal with very well, thanks very much – while finding myself having the difficult job of explaining to a very bright eleven year old that he doesn’t have to worry about a war coming and that his mum and dad will always make sure he’s safe and secure. 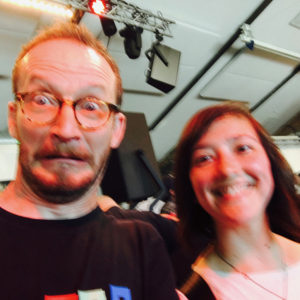 What has helped pull me back from the brink on more than one occasion has been my friends, a great number of which I’ve gained through a common love of beer and all things beery.
And so thank you gang, you’ve saved me from myself several times over the last twelve months.
I owe you all a drink.
Though not all at the same time, I couldn’t afford that.
To end on a more promising note, there is already a marvellous CAMRGB London event being planned for the end of February next year – our first #Twissup in a long time – and I’ll get details out as soon as I can.

Thanks to everyone for keeping the Campaign For Really Good Beer alive.
Celebrate good beer.
Celebrate each other.
Say no to hate.

Founder of CAMRGB. Member of The British Guild Of Beer Writers. Leftist bigmouth. Old and grumpy.
View all posts by Simon Williams →
This entry was posted in Beer Events, Beer Review, CAMRGB and tagged 2016, Beer, Beer Year. Bookmark the permalink.