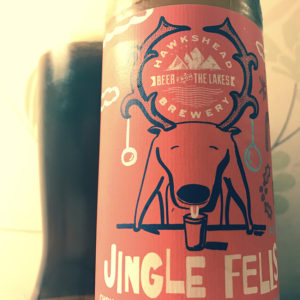 What really jumps out at me from this beer, rather than the coriander and cinnamon, fennel, ginger and caraway, cloves and nutmeg is the addition of beech smoked malts.
Don’t get me wrong, all that spicy goodness is there in abundance, but those beech smoked malts sneak up on you and slowly build into a delightfully pithy wood smoke warmth that adds a whole extra layer to this already well made beer.
There’s also some chocolate malt in here which provides a much needed sweetness that cuts across all those Christmas spices and the sharp bitter sting of the hedgerow hops, nettle tea and lemon rind and a little aniseed from the Fuggles.
That smoky malt pops up in the aroma too, it’s subtle but it’s there and it raises this beer above so many others brewed with lots of similar Yuletide ingredients.