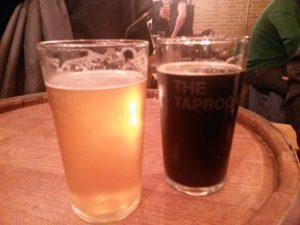 For the second year running the Woolwich based brewery Hopstuff has produced a series of beers in collaboration with the Drury Tea and Coffee Company who are also based in the same location at Royal Arsenal.

Last year I was impressed by the Jasmine Tea Pale Ale so I was looking forward to sampling this year’s brews. The beers were recently launched at the brewery’s taproom and like last year there are three beers in the series. These are an Earl Grey Pale Ale (3.5%), a San Augustin Porter (6.7%) and a Spiced Chai Red (5.2%).

I started with the Earl Grey Pale Ale. Initial gulps were promising with that classic earl grey/bergamot and lemon flavour combination but I found it had a very dry aftertaste which nullified the beers initial refreshing taste. It was a bit too much and even at 3.5% I found the pint a bit of a struggle to finish.

I am pretty sure that the porter is based on Hopstuff’s excellent heavyweight Gunners Porter but this time using Colombian San Augustin coffee. The strength was slightly down too and 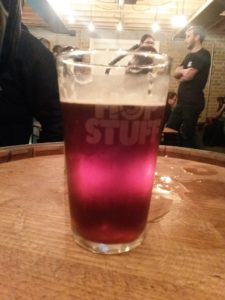 alongside that classic porter taste was the addition of black cherry, red fruits and vanilla which gave it a hint of sweetness aginst the bitterness of the coffee. One to sip slowly.

As we head towards Christmas the Spiced Chai Red could not be more appropriate. It’s a drink made for Christmas full stop as it is packed with seasonal flavours of cardamon, cloves, ginger and cinnamon which compliments it’s nice looking reddish colour. Sampling it again a week later there was also a hint of lemongrass/lime. This was the beer I thought I would most dislike but it was actually very nice and was a fine contrast to the other two brews.

All the beers were served from keg and are still available at the aforementioned taproom. They can also be found online at the brewery webshop.