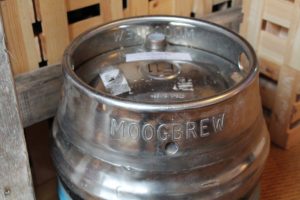 A couple of weekends ago we were in deepest Buckinghamshire for an afternoon of footy and whilst looking online for a place for pre-match drinks our organiser stumbled on the moogBrew Open Day. Heading to the village of Taplow we soon found ourselves in a small friendly brewery drinking lovely beers. A few days later I fired off some questions which they were kind enough to answer.

We are Margi & Id Williams 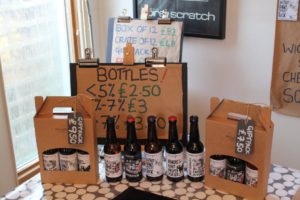 How did moogBrew come into being? When did you start brewing and why?

We started home brewing about 4 years ago. It was the logical next step in our journey of learning about beer and brewing methods that started in 2007 with taking on the challenge of tracking down and trying Roger Protz’s “300 beers to try before you die”. After travelling extensively in the USA and Europe we managed to try about 280/300.

Along our journey we met many brewers and learned a great deal about diverse beer styles and brewing methods. The motivation with brewing was simply to continue our journey of learning.

We entered three home-brew competitions, got an honorable mention as runners up in the first, won the second and third outright. By the time of the third competition in October 2014, we’d come under concerted pressure to turn commercial. A week later, we were introduced to the owner of XT Brewing in Thame, who invited us to brew our competition winner at their brewery. We went from brewing 50 litre batches to 2500 litres. That beer was “Bastard Bunny Brew Ha Ha” a 7.2% double IPA, which received great reviews and sold well. We learned a great deal about brewing and also how the beer market operates.

During 2015, we put in motion plans to turn our 100 litre brewery at the bottom of our garden into a registered commercial brewery. After 9 months of seemingly endless bureaucracy we eventually cleared all the hoops and received a registration certificate in March 2016. We launched our first solo-brewed commercial beers on April 1st 2016.

The brewery is quite compact. Can you describe your set up?

The brewhouse is a modular insulated building at the bottom of our garden. It measures 3.6m x 2.4m 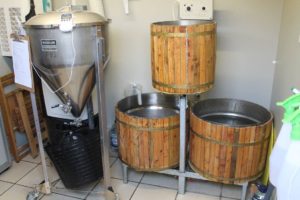 What is your capacity? How many cask barrels, kegs or bottles do you produce?

Maximum brewing capacity (brew-length) is 100 litres, which can yield a maximum 1/2 BBL (brewers barrel – ie 2 x 72pint firkins). In practice, because most of our beers are specialist relatively high ABV beers, we yield between 50 and 100 litres per batch. Each beer spends about 15 days in the uni-tanks (fermenters), so we can brew on average once every 5 days or 6 times a month.

How did the brewery get its name?

“moog” was the nickname given to Margi by her mother, who died in April 2015. The name is partly in honour of her and also – we think – a bloody good name for the brewery!

I really enjoyed the Bastard Bunny Strikes Back (one for the old NME fans!) available during the open day. How many 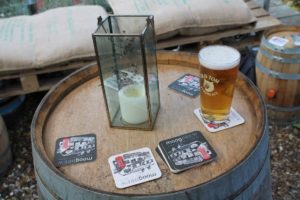 different beers are you currently brewing? And how many have you brewed?

We currently have six beers in our range, four of them taking their names and inspiration from characters in the Bastard Bunny cartoon strips. It’s been fun working with Bunny creator, Dave Anderson and the gang. We have also brewed several pilot beers that are likely to see release during 2017.

What is your favourite beer style to brew and why?

We love IPAs and Imperial Stouts in the US style because of their big bold flavours. In 2010, we took a motor-home up the West Coast of the US and returned in 2013 to San Diego, taking in countless breweries;invariably it was their IPAs and Imperial Stouts to grabbed our attention. We also love many Belgian styles, including Trappist beers, Saisons and Lambics.

What is your favourite hop and why? 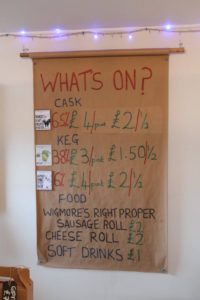 We don’t necessarily have a single favourite hop. We love the way hops can be used in different permutations to bring out very different characteristics in beers. The best brewers, in our opinion, are those that understand and work judiciously with the subtleties of different combinations to match and enhance the character brought by the malts and yeasts.

The story about the wild hops was great. Are you going to use them again next year?

Yes, we have hops growing wild in the hedgerows all around where we live. We love the fact that we know so little about these hops and that brings a level randomness into play. The taste effect is always unique and different from anything we’ve tried using cultivated hops. To an extent this may be because they are green and so fresh, reaching the kettle within half an hour of being picked. It’s a beer that is very popular with the locals, who seem to share with us a sense of joy at the local provenance of the finished product.

What are your future plans? Have you thought about expanding?

Our aim is to remain small and local. Our beers are available only within a 10-mile radius of the brewery; that suits us. You won’t hear moogBrew shouting from the rooftops … we are a well kept secret!

Where can we find your beers? 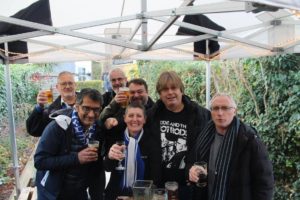 Mainly at the monthly brewery open days, but also on Maidenhead High Street at the monthly ‘Eat On The High Street’ event that provides a valuable platform for small independent and local traders. We supply occasional casks to our own favourite local pub, The Royal Standard at Wooburn Common and local beer festivals within a 10-mile radius, including, Egham, Ascot, Datchet & Maidenhead.

Any advice for the home brewer like me who wants to move away from brew kits and malt extracts?

1. Just do it! 2. Make mistakes & learn from them 3. Talk to the brewing community; we’ve been overwhelmed by the openness of brewers and their willingness to share knowledge

Go on, give the next open day a plug!

Er…. sometime in February (we’re taking some time out in January); check the website (moogbrew.co.uk) for details, as well as the usual social media

What are your favourite beers (other than your own of course!)? 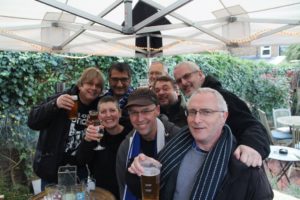 Albert or Pannepot from De Struisse never disappoint and we have a soft spot for Salopian Brewery and their black label range. Alesmith & Society Brewing are amongst many great San Diego brewers and what Burning Sky (in Sussex) are doing with blending and ageing, especially their Saisons, is very interesting.

And recommend a pub!

A brewery taproom whenever possible. Help keep the brewers in business by buying and drinking direct.

A big thank you to Margi & Id for answering these questions. Find out more at the following links:

Thanks to Jonathan Taffel for the photos.

This entry was posted in Brewery, Interview and tagged MoogBrew. Bookmark the permalink.

2 Responses to Interview with moogBrew