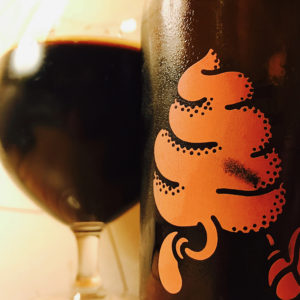 Omnipollo love their big thick chewy ice cream flavoured beers and they’ve only gone and brewed some with Buxton, a brewery that I love.
And boy oh boy it’s good.
Pouring inky black, the beer smells of coffee and chocolate and vanilla, it’s sweet and sumptuous and to be honest, smells just like ice cream.
Taking a mouthful you find a great big creamy treacle and pecan pie, honey and burned wholemeal toast malt and some crunchy red leaf litter hops.
But mainly you find yourself smelling and tasting a beer that, to all intents and purposes, is a pot of Ben & Jerry’s.
That’s how much it feels like ice cream.
There’s nuts and praline, honey and vanilla, and the beer drifts on and on into the distance with its sexy boozy warmth.
This is such clever brewing.