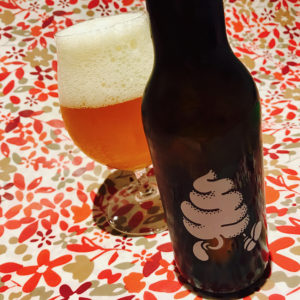 Imagine a decent cream soda.
No, actually, imagine the kind of ice cream float that your grandmother used to make you, lemonade with a spoonful of ice cream on top.
It always sounded far nice than it was in actuality.
That’s this beer.
There’s a great big blob of lactose in this beer and it makes everything feel smooth and creamy and vanilla sweet.
But there’s a massive hop blast too, which generally would be a good thing, but like that ice cream float your nan used to make, it means that the sharp lemon feels overly abrasive against all the soft roundness of the initial taste.
What this does for me is create a rather confused beer.
I love Omnipollo’s crazy Stouts because all this lactose sweetness works well against the gloopy malts, but here the ice cream sundae part of the beer fights to the death against the hoppy Pale Ale and neither side wins.
Nope, I’m not a fan of this one.