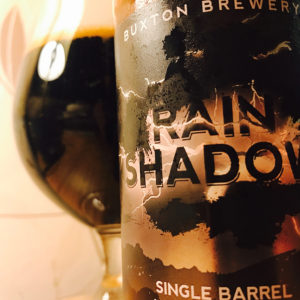 Rain Shadow is one hell of an Imperial Stout, but Buxton thought they’d go one better and stick a bunch of it in Bourbon Barrels just to see what happened.
And what happened is that the most beautiful monster was born.
All the original rich Rain Shadow loveliness is here, the dark bitter chocolate, the espresso, the plum jam and birch bark hopping, but now there’s a super sexy liquorice root and damp oak woodiness that makes the beer feel even deeper, even bigger than it did in its original form.
The chocolate has become a gloopy truffle dusted with dry cacao and there’s hazelnut praline and a gorgeous throat warming rum booziness.
If nothing else, this is an example of just how brilliant Barrel aged beer can be, but in all honesty it’s so much more than that.
This is a beer that proves the worth of its brewer and his team, because this is so finely tuned that it can only be the work of someone who knows exactly what they’re doing.