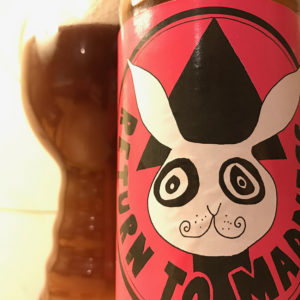 Man alive, this is mental.
But then, with a name like “Return To Madness” it ought to be, right?
This is an Imperial IPA brewed with a Belgian yeast strain that, according to the label, “brings out an incredible fruitiness.”
And it does.
It’s so fruity that it’s almost like fizzy pop.
A massive splash of prunes and plums, apple juice and lemon zest, and then a deep rich round brandy flavour drifts to the surface, along with a chest warming boozy heat.
The beer sits in my glass a rich conker red with a big fluffy head and smells of toffee and jelly sweets, sticky and sweet and inviting, and as you drink a delightfully and surprisingly mellow malting starts to peep out.
It’s all treacle tart and trifle biscuits, a little rye bread and some runny honey, and right in the finish that yeast pops up again with a touch of earthy spice to add another layer to this rich and complex beery trip.