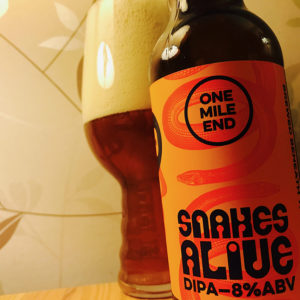 Snakes Alive is a rather feisty Double IPA that pours with an enormous cloud of fluffy foam for a head.
The aroma contains lots of lemon and honey and some tropical fruit, but there’s also a bit of a gassy yeast fug which is hardly surprising given the amount of foam created when I poured.
The malting is rich and round and rather creamy, with lots of caramel wafers, honey and brioche creating a solid body over which the hops are sharp and keen, hedgerow pithiness and a sherbet prickle, lemon rind sharpness and some fruity mango.
All in all a rather nice beer that would probably rise to super if it weren’t for the yeast overdrive of this particular bottle.