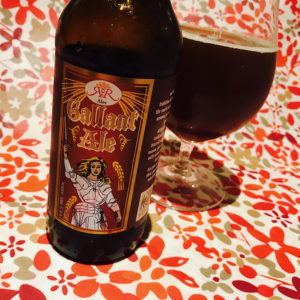 I was expecting a lot from this little bottle of beer as I’d heard some good things about R&R and how they are recreating old recipes.
Gallant Ale is a Kentish Farmhouse beer and it’s drinkable if rather uninspiring.
It doesn’t help that my bottle is almost completely flat which makes the beer feel flimsy and lifeless.
There’s a lot of malts going on in here, with treacle and honey, biscuits and bran flakes making the beer taste very sweet.
The hops hint at bitterness but struggle to fight their way through the syrupy malts, but you get a glimpse of aniseed and some hedgerow greenery if you really concentrate.
A little more life would certainly help push some of the sharpness through, but because it’s lacking the beer falls down almost right away.
Pity.